its in our nature

From Ancient Rowing To Modern Rowing

Rowing was the favorite sport practiced by ancient Egyptians. They
competed between Luxor temple to Karnak temple in Luxor.
Four thousands years ago, during the reign of the Pharaoh
Akhenaton, a group of young oarsmen gathered on the Nile embankment in
front of Luxor temple in Luxor (then known as Thebes, Capital of the
ancient world) – to compete in a royal regatta, known later as:
The Competition started in front of Luxor temple and ended in front of
Karnak temple (A 2000 meters race). This festival took place annually for
centuries until gradually fading from the scene. It was a colorful Egyptian
tradition.
Monuments testify:
If you visit the tomb of prince Khety at Bani Hassan, who belongs to
the eleventh dynasty which ruled Egypt from 2040 – 1991 BC, You will find
a tablet representing a Pharaonic Rowing Boat.
In the Egyptian Museum, piece No. 4040 is another model of rowing
boat from pure silver with its crew. Also under No. 4039 you will find a
golden rowing boat. Three sailors of the crew are made of gold and the rest
are made of silver.
5
Moreover there are models of wooden oars painted with shining black
coating. These oars belong to Tot Ankh Amoun (A King from eighth
Dynasty governed Egypt from 1554 to 1306 BC).
In the year 1907 start the activity of Rowing sport, After that In the
year 1971 the tradition was revived on the same race course with some
difference. It became a modern National and International rowing regatta.
Rowing Sport is considered one of the little sports who had been inserted in
the Olympic program from the beginning; it was inserted in the second
Olympic Games in Paris.
Types of Rowing boats and its development:
Rowing Boat is a beautiful model of artistic wood working …. From the fine boat work
which was made especially for rowing, the “Zowbaa “boat made by “George Syberz” in
America 1838, who won the American race 1851… After that, He manufactures the
quadruple boat “out Riggers”. The boat length was 30 foot and weighted140 pound. He
made also the “Oyenda” boat on 1845 for Boston race, “Harford University” bought this
boat, it was made from wood named “Lepstreak”, and the boat length was 37 foot and
3.5 foot width. The oarlock was manufacture from wood as for the boat; it was
manufacture from wood pieces till the middle and the rest from one ornamentation wood
piece, the shoes were made from wood bar, the chairs covered by red fabric. The 8
white oars were manufacture from oak, the length of the front and middle oars is 12 foot
as for the back oars is 13 foot & 6 inches. , this boat was used in “Harford University”.
The “Out Riggers” boats were used in England Universities 1845, America Universities
1855, and the oars were manufacture from “Argent Tanoub wood”.
A variety of boats are used in modern rowing, it could be divided into two main
groups: 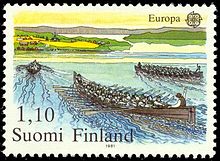 The history of rowing as a sport has prevailed it as one of the oldest traditions in the world. What began as a method of transport and warfare eventually became a sport with a wide following, and a part of the cultural identity of the English speaking world. Rowing in its modern form developed in England in the 1700s.[1]

Today rowing is an amateur sport and an Olympic event. When Pierre de Coubertin created the Modern Olympics, he modelled the International Olympic Committee on the Henley Stewards. The stewards organise the Henley Royal Regatta, one of rowing’s most prestigious events.

Even since the earliest recorded references to rowing, the sporting element has been present. An Egyptian funerary inscription of 1430 BC records that the warriorAmenhotep (Amenophis) II was also renowned for his feats of oarsmanship. In the Aeneid, Virgil mentions rowing forming part of the funeral games arranged by Aeneas in honour of his father.[2]

The finish of the Doggett’s Coat and Badge. Painting by Thomas Rowlandson.

The first known ‘modern’ rowing races, began from competition among the professional watermen that provided ferry and taxi service on the River Thames in London. Prizes for wager races were often offered by the London Guilds and Livery Companies or wealthy owners of riverside houses. (ref, The Brilliants p14). During the 19th century these races were to become numerous and popular, attracting large crowds. A contemporary sporting book lists 5000 such matches in the years 1835 to 1851.[4] Prize matches amongst professionals similarly became popular on other rivers throughout Great Britain in the 19th century, notably attracting vast crowds on the Tyne. The oldest surviving such race, Doggett’s Coat and Badge was first contested in 1715 and is still held annually from London Bridge to Chelsea.[5]

Amateur competition in England began towards the end of the 18th century. Documentary evidence from this period is sparse, but it is known that the Monarch Boat Club of Eton College and the Isis Club of Westminster School were both in existence in the 1790s. The Star Club and Arrow Club in London for gentlemen amateurs were also in existence before 1800. At the University of Oxford bumping races were first organised in 1815 while at Cambridge the first recorded races were in 1827. The Boat Race between Oxford University and Cambridge University first took place in 1829, and was the second intercollegiate sporting event (following the first Varsity Cricket Match by 2 years). The interest in the first Boat Race and subsequent matches led the town of Henley to begin hosting an annual regatta in 1839.[6]

In America, there is also a sizable rowing community. Ports such as Boston, New York, and Philadelphia required the building of many small rowing boats, and competition was inevitable. The first American race took place on the Schuylkill River in 1762 between 6-oared barges. As the sport gained popularity, clubs were formed and scullers began racing for prizes. Professionals were rowing against clubs and each other before the civil war. Races were often round trips to a stake and back, so that the start and finish could be watched. The public flocked to such events, and rowing was as popular in America during the 19th century as other professional sports are today. In 1824, ferrymen from the Whitehall Landing at Manhattan’s Battery raced a crew from the British frigate HMS Hussar for $1,000. Thousands bet on the event and the Americans won. In 1838, six men formed the Narragansett Boat Club in Providence and today Narragansett Boat Club is the oldest rowing club, and the oldest athletic club in America. In 1843, the first American college rowing club was formed at Yale University. The Harvard–Yale Regatta is the oldest intercollegiate sporting event in the United States having been contested every year since 1852 (except for occasional breaks due to major wars, such as World War II and the US Civil War). The oldest inter-high school competition in the United States also occurred on the water, in the form of a race in six-man boats between two New England boarding schools: Phillips Exeter Academy in Exeter, New Hampshire, and Phillips Academy Andover in Andover, Massachusetts. The oldest continuous rowing club in America is the Narragansett Boat Club, in Providence, Rhode Island, founded in 1838.

FISA, the “Fédération Internationale des Sociétés d’Aviron” in French (or the English equivalent International Federation of Rowing Associations) was founded by representatives from France, Switzerland, Belgium, Adriatica (now a part of Italy) and Italy in Turin on 25 June 1892. It is the oldest international sports federation in the Olympic movement.[7]

For most of its history, rowing has been a male dominated sport. Although rowing’s roots as a sport in the modern Olympics can be traced back to the original 1896 games in Athens, it was not until the 1976 Summer Olympics in Montreal that women were allowed to participate – well after their fellow athletes in similar sports such as swimming, athletics, cycling, and canoeing.

Women have competed in rowing events as far back as the fifteenth century. When Beatrice d’Este visited Venice in 1493, a regatta was held in which fifty peasant women competed.[9] There were professional women rowers, referred to as Roddarmadam, managing and dominating the water ferry in the archipelago of the Swedish capital of Stockholm from the 15th-century up until the late 19th-century.[10] Women’s rowing in modern times can be traced back to the early 19th century, and an image of a women’s double scull race made the cover of Harper’s Weekly in 1870[citation needed]. In 1892 four young women (Zulette Lamb and Lena, Agnes, and Caroline Polhamus) started ZLAC Rowing Club in San Diego, California when they borrowed a boat and began rowing on San Diego Bay.[11] The club considers itself the oldest all-women’s rowing club in continuous existence in the world. Newnham College Boat Club was formed the following year in Cambridge, England. In 1927, the first Women’s Boat Race between Oxford and Cambridge universities was held (for the first few years it was an exhibition, and it later became a race). And in 1954, the women’s events were added to the European Rowing Championships. In 1988, the first Henley Women’s Regatta was held. On 27 April 1997, one of the last bastions of rowing was breached when, at an Extraordinary General Meeting, Leander Club voted to admit women as members. This rule met a condition imposed by UK Sport and qualified Leander to receive a £1.5 million grant for refurbishment from the Lottery Sports Fund.[12]

At international level, women’s rowing traditionally has been dominated by Eastern European countries, such as Romania, Russia, and Bulgaria, although other countries such as Germany, Netherlands, Canada, Great Britain and New Zealand often field competitive teams. The United States also has often had very competitive crews, and in recent years these crews have become even more competitive given the surge in women’s collegiate rowing, and the establishment of theNCAA Rowing Championships for women.

the African crews will be heading to tokyo 2020